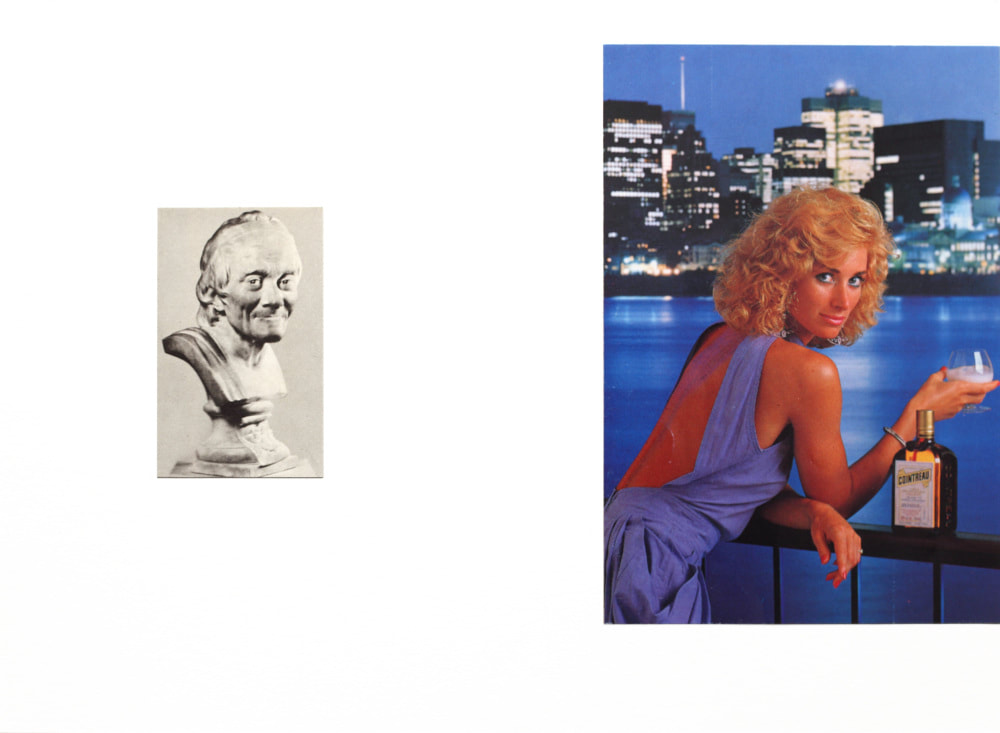 
“Look, hon-knee-bun!” Hal sputtered enthusiastically pointing to the commercial on the screen. His supine pastel body, bereft of youth and vitality, was half-wedged between the wall and the side of the bed as if left to rot. Averting her eyes, Marlowe, a photographer for Modern Times Inc., artlessly held up his company headshot slantwise so Hal could view it, animating the tension between the real and its iterations.

Marlowe’s eyes rotated toward the small flat screen affixed to the yellowing wall above the radiator. Its crenulated centre vibrated mechanically, filtering water, she surmised, from the showers of nearly 300 apartments above them. Her gaze was now locked on Hal’s anthropomorphized portrait on the screen, frozen and propped up as if it were one of F.J. Gall’s specimens.

“Ohh myyhh yess… My Gawd!” Marlowe replied with feigned excitement from the crack of her pursed lips, veiled in polyester. Hal smiled at her from the side of his mouth. Caught in this uncanny triad, Marlowe felt overexposed with reluctant empathy, she placed the photograph face up on the clunky brown hotel nightstand and recoiled to the other corner of the furrowed bed. She wrapped herself in the paisley polyester comforter wishing she had that kind of fervour for the cruel vicissitudes of this world.


Thirteen years earlier, in July, The Conglomerate’s nationwide mandate replaced Greeters with Customer Hosts to carry out an expanded repertoire of responsibilities in addition to embodying the guiding principles of corporate affect. Hal fully internalized the spirit of this new role, greeting each customer who entered those glass double doors with pleasant platitudes. Every shopper represented the attrition of his own life. He knew it was only a matter of time before his body, slackened and riddled with illness, would succumb to the pull of gravity and time.

In unquestionably the last stage before ineluctable cataclysm, the new administration sought to humanize The Conglomerate by designing a cute, inanimate, potato-like quasi-object, ready for hominoid transmutation, to be distributed in perpetuity as its logo. Although he was bleached and penniless from years of service, Hal’s wizened characteristics and timeless expression, at least in his estimation, fit the objective template advertised by his employer.

There was no question that Hal, in his utter desperation and depravity, sold his likeness to be immortalized and proliferated for better or worse, in this new cartoonish potato-form—now called Gatty. The democratic model of upward mobility saturated his fantasies of the good life, where Hal could languish in bed for years at the Holiday Inn on piles of damp laundry and money. And so, Gatty became The Face of The Conglomerate, whose sister company was best known for processing the gelatine sold to Kraft Foods.


Hal’s friendly grimace and carefully moisturized head, groomed for showmanship, were pasted on that potato. Floating in an androgynous manner across a billowy blue skyscape the avatar lifted its cartoonish hands within the Panasonic frame. And from above appeared the logotype: Softique Beauty Blackberry Bath Beads—a prehistoric brew of organic chia seeds and black quinoa saturated in watermelon-scented oil—in cursive green, as if written by GAWD.

Marlowe stared lifelessly and wide-eyed at the small electric flat screen with a controlled terror that knows no escape. She clenched the pistachio colored shopping bags, heaped on the red striated carpet and filled with Hal’s necessities, with her long middle toe. No grin, no grimace, utterly lifeless. Utterly. Stunned by the impact of Gatty, and with eyes heavy like barbells, she sloughed off the rancid polyester comforter and gathered her tongueless shoes with no laces.

Leaving Hal and his fossilized loins, probably for the last time, was not without its sensitivities, even if it was for the best. Marlowe fiercely tucked her Klein Blue Modern Times Inc. polo into her rubbery black slacks and prepared to join the waiting mass of strangers trudging in rainsoaked garbage. What remained were images, of Gatty and others, delaminated from history and restaged in positions where their contextual grounds inevitably come bubbling up, obliquely or directly. It was not the fact that Hal would persist forever and everywhere as Gatty, nothing exists without its attachments, but that it was the symbol of Marlowe’s own dissolved assurances of the liberatory promise of representation.